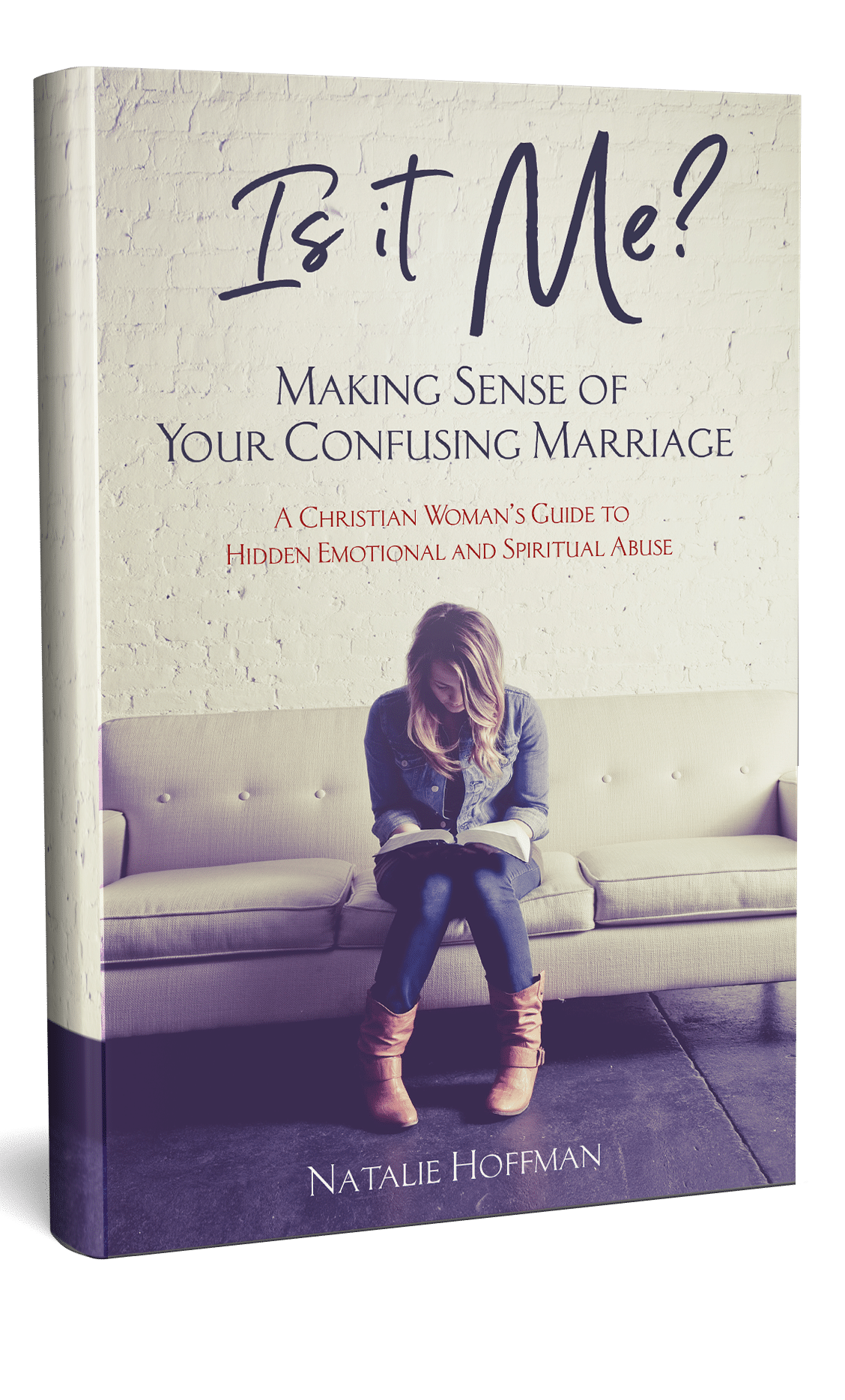 Is It Me? Making Sense of Your Confusing Marriage

One out of three married women sitting in an average conservative Christian church is in a confusing and painful marriage. If this sounds like you, join me on a journey of discovery that will change your life. We’ll look at exactly what is going on in your marriage (no more confusion!) and what a normal marriage looks like. 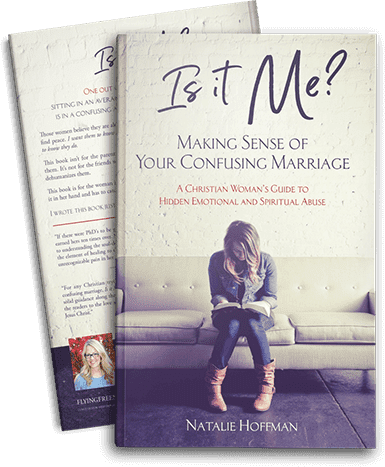 Is This Your Marriage

“Why do concerns I bring up never seem to be resolved? Why do I feel like Charlie Brown, flat on his back from ahving the football snatched away? Why, when I bring up a concern, do I always end up justifying my existence or being the one to apologize? How do things seem to get turned around on me?”

“I feel like I walk on eggshells, and I’m scared of his reactions to grievances I express, so I keep them to myself.”

“Praying, bargaining with God, and submitting more hasn’t ever improved our relationship. But I am stuck here, because if I don’t hold up my end perfectly, I can’t ask him to do anything.”

If you grew up in a dysfunctional home, or if you’ve been in an emotionally destructive marriage, you might think what you’ve always experienced is normal. It’s what you’re familiar with, and you may have no reason to believe there could be another way for two married people to relate to one another.

If you’ve been marinating in dysfunction for any length of time, you might be tempted to think that the things I’m sharing in this chapter are descriptive of a fairytale marriage that’s almost non-existent in the real world.

I want to assure you right here at the beginning that this is not the case. This chapter is really and truly a description of a simple and normal marriage relationship, and certainly a Christian one.

Propaganda is biased information spread within a closed group in order to influence the group to believe or behave in specific ways.

For example, in World War II, Hitler spread propaganda over the course of several years that influenced the German people to buy into his idea that some people were more deserving of life and liberty than others. His propaganda plan was so effective that he was able to murder millions of Jews while his countrymen either helped or looked the other way.

During the Civil War, some Bible-believing white people believed black people were created to be enslaved by whites. It was God’s order of things, so they said, and they believed they had Bible verses like Ephesians 6:5 and Titus 2:9 to back them up. (I can almost hear their battle cry: “It’s BIBLICAL!”)

Just like any tool, propaganda can be used for good or evil. It’s obvious to us now, many years later, that Hitler and the southern slave-owning Christians were pushing their own prejudiced agenda, but what about today? Where do we still see injustice toward a segment of the human race? And who is spreading propaganda related to the subjugation of that segment? If there were PhDs to be given on the subject of emotional abuse, Natalie Hoffman would have earned hers ten times over. Natalie is remarkably knowledgeable and character-savvy when it comes to understanding the soul-death that occurs during the terror of emotional abuse. Furthermore, she brings the element of healing to the table. Any woman who questions herself while sensing deep, unrecognizable pain in her marriage should read Is It Me?
Megan Cox

MAR Pastoral Counseling, Founder of Give Her Wings, Inc. This is an excellent resource—the kind of unvarnished truth that my precious sisters in Christ need in order to know they are not crazy, and the abuse they are enduring is not their fault. I will be prescribing this book immediately. Faith communities often inadvertently foster a climate of hidden abuse for a wide variety of reasons ranging from inaccurate theology to protecting the organization’s reputation. “Is It Me?” addresses this toxic reality behind the scenes that radically misrepresents the character of God in the Christian home, and shows women how to make sense of the systems of abuse that are clouding their vision and tearing them apart. Highly recommended!
Sarah McDugal

This workbook is not a sweet, fluffy piece of candy that melts in your mouth and slips down your throat with a sigh of pleasure.Instead, it’s more like a surgical scalpel that will cut deep to the core of who you are and what you’ve experienced, and it’s going to hurt like crazy.

But it will bring you deep healing and hope for a better future, and there are warm blankets of comfort laid out for you here and there along the way.You are going to take the manure the enemy put into your life, and you’re going to make fertilizer. Fertilizer that will nourish the soil of your future and feed your new life.

“For I am about to do something new. See, I have already begun! Do you not see it? I will make a pathway through the wilderness. I will create rivers in the dry wasteland.”—Isaiah 43:19

I can’t put this book down! The information in this book is exactly what I need right now! Natalie presents and cuts through false beliefs and lies that I have been taught to believe my entire life! She lovingly speaks truth and puts confusion to rest (in the grave where it belongs). I can’t wait to read the rest of this book.
Natalie’s book has been the most in-depth and insightful perspective I’ve read in relation to my own confusing Christian marriage. She spells out the beliefs, attitudes, and behaviors that are at play in destructive relationships. She unveils the predictable patterns that all emotionally abused spouses walk through and the steps to healing. I felt I could finally put words to my confusion through her examples. She truly gets it! So much truth packed into this book. It’s a must read for all Christian women whether they are in a destructive relationship or know someone who is.
I wish I’d had this book ten years ago. It summarizes very well what took me several months with a life coach to see. This book validated my experiences and led me to a new life of freedom I didn’t think was possible.
This book is perhaps one of the best written books I’ve read in regard to my marriage. I wish it had been available 10 years ago. I often have a hard time reading through these types of books simply because of the writing styles; but Natalie did an excellent job keeping each chapter on point with very clear explanations that I’ve not seen before. The words jumped off the pages and poured into my heart, renewing my walk with Jesus and His commitment to walk with me through the fire. I strongly recommend this book for any woman of faith struggling in their marriage. It truly is a game changer. Incredible truth from a gospel centered perspective.
This book provides answers to questions about abusive relationships from a faith-based perspective, which is sorely needed for Christian women today. The faith-based lens is so important because many Christian women are taught erroneous principles that keep them in abusive relationships and prevent them from healing and recovery.
Natalie writes with astounding clarity to unveil the source of the pain so many women of faith experience, but aren’t able to put in to words. She walks through how it happens with compassion and frankness. If you’re a woman who loves Jesus and your marriage is painful no matter how much effort you put in to try to fix it, this book will change your world forever. Can’t recommend enough.
This book goes step by step through the fog of verbal abuse to the clear understanding of what is really happening. There is no sugar coating to this book. The truth about emotional and spiritual abuse is made clear. Natalie doesn’t leave the reader at the point of realization. She takes you through the turmoil of getting out and through the difficult process of grieving and healing. It is easy to read and I would call it a page turner because when a Christian woman is in a fog (like I was), getting validation and hope makes one want to keep reading. Another aspect that is made clear in this book is the secondary abuse and spiritual abuse that verbally abused women often go through when trying to get help from her church. 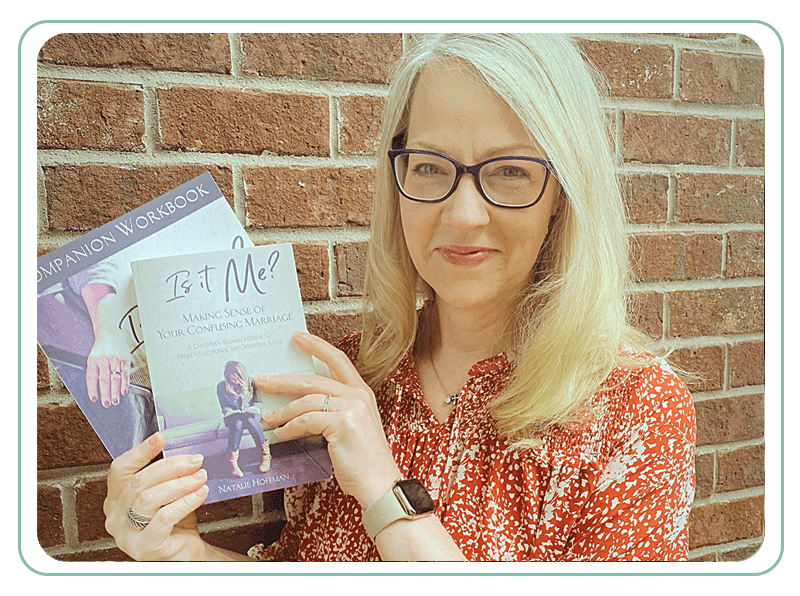 A Note from the Author

If this sounds like you, join me on a journey of discovery that will change your life. We’ll look at exactly what is going on in your marriage (no more confusion!) and what a normal marriage looks like. You’ll learn about the roles your husband, your church, your friends, and your counselors are playing in your confusing marriage. We’ll look at your role and how to change it.

Are you wondering where God is in this mess? I’ve got an entire chapter devoted to that question. Once we’ve figured out the problem and all the moving pieces, we will look at your future. Because you’ve got one! We’ll talk about the key to unlocking hope and peace—and even joy. And you’ll get a roadmap to help you navigate the next steps to take when your time in this book is over.

Have you been looking for answers in all the wrong places for far too long? Are you exhausted? I get it. I’ve been there. I’ve got something to show you that may be uncomfortable and even painful, but the truth eventually sets us free. And that’s what I want for you. I want to see you fly. If you’re ready for a change, take my hand. You’re not alone anymore. Let’s get started.